Dr Vanderpump reported on a recent virtual seminar provided by Hempsons on Coroner’s inquests. The following issues were discussed:

The decision can be challenged and the coroner can request an investigation or root-cause analysis. A jury inquest may be organized in the following circumstances:

There was discussion by members on their experience at inquests including as experts and the interaction with relatives of the Deceased who may have legal representation. Frank Chinegwundoh discussed his recent experience attending an inquest remotely by zoom.

Involving an NHS Trust being found liable for the injuries a child sustained when a hospital diagnosed her with tonsillitis but failed to recognise that she also had meningitis. The hospital had not addressed the meningitis symptoms previously identified by the child’s GP or appreciated that antibiotics administered by him prior to hospital admission could have masked the development of the child’s symptoms, and that the only safe way to proceed was to carry out tests to exclude other possible diagnoses.

The case also confirmed that the SHO involved was judged as against the standard expected of a reasonably competent SHO (i.e. not against the standard of a Consultant). It was, in fact, the Consultant’s assessment of the child and his decision to discharge on the basis that this was tonsillitis which was impugned.

There have been changes to how we categories this disorders over the last few years. Both in the DSM V (diagnostic statistical handbook) and International Classification of disease (ICD-11).

The newer definitions of SSD do not exclude an organic cause but merely reflect the psychological disabling nature of the pains.

The latest edition of DSM 5 has moved away from the need to have no medical explanation in order to make the diagnosis of ‘medically unexplained symptoms’ and gain access to appropriate treatment.  The emphasis now is on symptoms that are substantially more severe than expected in association with distress and impairment.  The diagnosis includes conditions with no medical explanation and conditions where there is some underlying pathology but an exaggerated response. 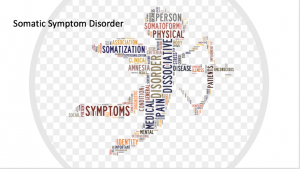 The commonest problem is to differentiate this disorder from the ‘histrionic elaboration of organically caused pain. Patients with organic pain for whom a definite physical diagnosis has not yet been reached may easily become frightened or resentful, with resulting attention-seeking behaviour’.

Specify if: With predominant pain (previously pain disorder): This specifier is for individuals whose somatic symptoms predominantly involve pain.

Specify if: Persistent: a persistent course is characterized by severe symptoms, marked impairment, and long duration (more than 6 months).

These are categorical diagnosis.

It has been considered there has been significant diagnostic amplification over the recent re-defining these disorders and now catch a lot more people.

It has been shown this could  be applied to 15-25% all patients in cardiac clinics and most people in pain clinics.

They are graded as mild, moderate, severe but this is based on the number of sites, systems or psychological consequences involved not related to the patients physical functional status?

The LCA would like to thank everyone who attended, particular our presenters.

All LCA members with an interest in Medico-legal work as expert witnesses are invited. The format may remain virtual given the current restrictions regarding meetings.

The following issues were discussed:

There might be a drop off in patients claims vs NHS due to cancelling of elective treatment, the availability of “resource” defences in the context of the current pandemic and the current genial climate for all healthcare workers. Employee claims may be a big issue, particularly in light of the problems with PPE and the BMA interventions on it. 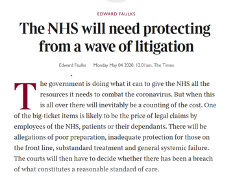 Ultimately, managers have a right to issue the employee with a “reasonable management
instruction” to attend work, or else be subject to a disciplinary process. But the key word is
“reasonable”. If the employee is dismissed and brings an unfair dismissal claim, or resigns and brings a constructive dismissal claim, then an employment tribunal will look at the circumstances of the case and whether the employer acted reasonably, taking account of the
employee’s circumstances at home as well as at work.

Furthermore, if an employee is classed as disabled, a tribunal may consider it discriminatory to take disciplinary action against them (or withhold pay) for not attending work. An employee who is found to have been dismissed because they raised a health and safety concern, or because they refused to work in a workplace found to be dangerous, may be able to claim unfair dismissal without the usual qualifying service of two years’ employment. These circumstances could conceivably apply where there is shortage of appropriate PPE, or where they are dismissed for bringing their own PPE to work. A complaint that the workplace is unsafe could also amount to a protected disclosure, and so the employee would have the additional protection against detriment and dismissal on the grounds that they are a whistle-blower.
Disciplinary action in these difficult circumstances is inevitably high risk. Cases should be carefully documented, and expert advice sought at every stage.

There were also difficulties noted in providing condition and prognosis reports with virtual examinations and which digital platforms would be considered as reasonable by the Court.

Solicitors are required to do their best to agree a single agenda. In the vast majority of cases, any disagreement ought to be capable of resolution through a bit of give and take. It should not become routine to provide two versions which travel over much of the same ground. If the trend continues, parties may find that courts begin considering costs consequences.

Whilst the laywers may properly assist the experts by ensuring that they focus on the issues which the court will need to determine, neither clients nor lawyers have any role in dictating to the experts what they can or cannot agree.

A case in the Technology and Construction Court. It was quite inappropriate for independent experts to seek input from their client’s solicitors into the substantive content of their joint statement or for the solicitors either to ask an expert to do so or to provide input if asked, save in the limited circumstances of (a) identifying issues which the statement should address (ie, agreeing an agenda); or (b) in exceptional circumstances to consider amending any draft where there are serious concerns that the court may misunderstand or be misled by the terms of that joint statement.

Any such concerns should be raised with all experts involved in the joint statement (per the Technology and Construction Court Guide at para 13.6.3). From the above, the TCC Guide envisages that an expert may, if necessary, provide a copy of the draft joint statement to the solicitors. However, the expert should not ask the solicitors for their general comments or suggestions on the content of the draft joint statement and the solicitors should not make any comments or suggestions save to both experts in the very limited circumstances identified in the TCC Guide. That is consistent with the fact that any agreement between experts does not bind the parties unless they expressly agree to be so bound (CPR 35.12(5)).

“There may be cases, which should be exceptional, where a party or its legal representatives are concerned, having seen the statement, that the experts’ views as stated in the joint statement may have been infected by some material misunderstanding of law or fact. If so, then there is no reason in my view why that should not be drawn to the attention of the experts so that they may have the opportunity to consider the point before trial. That however will be done in the open so that everyone, including the trial judge if the case proceeds to trial, can see what has happened and, if appropriate, firmly discourage any attempt by a party dissatisfied with the content of the joint statement to seek to re-open the discussion by this means.”

Dr Vanderpump presented a case of Cushing’s syndrome due to a pituitary tumour in a young woman who died at home unexpectedly. The Coroner’s verdict was that hypoglycaemia due to inappropriate glucose-lowering therapy was the cause of death and this was challenged.

Issues included: unreliability of capillary blood glucose (CBG) measurements in the home; resuscitation by paramedics; and absence of laboratory measurements.

Discussion followed re the Coroner’s verdict being challenged and how the expert had been asked to “reopen the inquest and revisit verdict”.

There was a convincing narrative and plausible case to explain sudden death in young person although the absence of laboratory measurement of glucose and Gliclazide data at low dose as an aetiology. The Primary vs Secondary care teams could blame each other. There was a danger of becoming too involved in a long-running case where the expert had highlighted poor management but was unable to produce evidence of causation on the balance of probability.

The LCA is very grateful to Gautam and Eliot for contributing to an excellent discussion.

The LCA held its 2nd Breakfast Club Meeting at Hempsons’ on 4th March 2020.

Duncan Dymond discussed a recent case where he had provided expert evidence in an Irish court. The Claimant (now Deceased), aged 55 with no known CVD risk factors, had been seen by a private GP having presented with non-specific symptoms and referred to a private hospital as an emergency. Over the next 9 hours there was evidence of an evolving inferior myocardial infarction and a previous silent anterolateral infarction. There was evidence of breach of duty in the delay in diagnosis, inappropriate investigations, a delay in referring to a specialist centre for PCI and then, once PCI was performed, the blocked right coronary after was not identified. The Claimant died on the day after admission due to cardiogenic shock.

Recent decisions on Consent from 2019 were discussed:

Ellis Downes presented an unusual case where he had been instructed to defend the management of a case of placenta accreta which had been complicated by inadvertent removal of  the bladder. The case raised generic learning points for all specialties.

The Group were reminded regarding the recent Academy of Medical Colleges advise for Medical Experts.