On Wednesday evening, 25th November, the LCA hosted another special edition of its virtual roundtables with guest Rt. Hon Jeremy Hunt MP, Chairman of the Health Select Committee, to the topic “How we can improve Quality and Safety in healthcare despite the pandemic”.

In a refreshingly honest and open discussion Mr Hunt acknowledged that the NHS is most admired worldwide for its equitable access and amongst the best in the world for innovation and attracts doctors who support this ideal. However, he also recognised that there are areas of quality and safety for which there is room for improvement. Mr Hunt gratefully acknowledge the welcome role that the private sector had played in supporting the NHS during the pandemic.

The LCA membership were very engaged during this online event and there was a lively question and answer session moderated by the LCA Chair, Dr Mark Vanderpump. This enabled a range of probing questions about value for money, future staffing, PPE, the role of track and trace and testing, and vaccines to be aired. Clearly many lessons have been learned both from within the UK and the experience of other countries. The need to ‘learn things on the go’ during the crisis resulted in some understandable changes of direction. 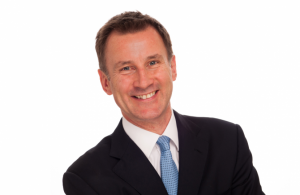 The current pandemic has resulted in exhausted staff, many of whom have suffered burnout and Mr Hunt was emphatic about the need for a robust workforce plan to resource future care. He referenced the fact that worldwide there are two million too few doctors and seven million too few nurses. Questions were put forward about the possible future of the private sector in supporting medical manpower issues and, in particular, the availability of anaesthetists to support the major NHS waiting list initiative required.

The pandemic has resulted in a governmental focus on public health and Mr Hunt highlighted mental health and obesity as being targets of future policy focus.

Dr Mark Vanderpump thanked Mr Hunt for taking the time to address the LCA and extended a future invitation to return when, hopefully, we will once again be able to meet in person.

Our guest: Jeremy Hunt was elected MP for South West Surrey in 2005.  He was appointed Secretary of State for Health (and later, Social Care) from 2012-2018 during which time he oversaw the imposition of the new Junior Doctors’ contract.  He was Foreign Secretary under Theresa May from July 2018 until his resignation in July 2019. Mr Hunt is the current Chairman of the Health Select Committee which is a cross party group which holds the government to account for policy, spending and administration.

This meeting was kindly sponsored by

There are no upcoming events at this time.