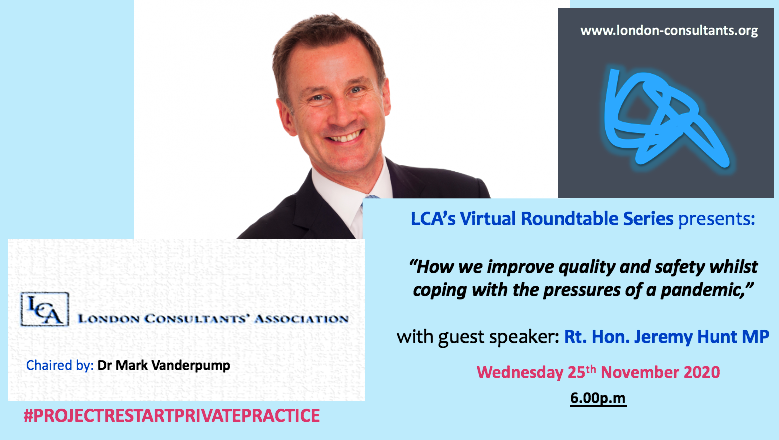 25.11.20 LCA Virtual Roundtable GUEST: Rt. Hon. Jeremy Hunt MP On Wednesday evening, 25th November, the LCA hosted another special edition of its virtual roundtables with guest Rt. Hon Jeremy Hunt MP, Chairman of the Health Select Committee, to the topic “How we can improve Quality and Safety in healthcare despite the pandemic”. In a refreshingly […]

28.10.2020 – LCA Virtual Roundtable GUEST: Mr David Hare, Chief Executive IHPN On Wednesday evening, 28th October, the LCA hosted another discussion in its series of virtual roundtables with David Hare, CEO of the Independent Healthcare Providers Network (IHPN). Mr Hare described the role of the IHPN, which is the trade association for the independent provider […]

“A plan for resumption”

Return to work – #ProjectRestartPrivatePractice   “A PLAN FOR RESUMPTION”   The LCA’s Chairman, Dr Mark Vanderpump recently spoke with the Independent Practitioner Today about kick-starting private practice, getting independent consultants back to work so that ultimately the administration of patient care can be resumed.    In the 3rd September article: “A plan for resumption”, Dr Mark Vanderpump […]

#ProjectRestartPrivatePractice Our recent LCA survey heard its consultants…and the outlook for private practice was not good.  The overwhelming feeling from the feedback received was that all practice had been suspended instantly with no support from the sector as overheads loomed and patients were denied treatment. Some consultants had been able to attend to some patients […]

LCA Medico-Legal Morning Reports with Hempsons solicitors SEPTEMBER 2020 Dr Vanderpump reported on a recent virtual seminar provided by Hempsons on Coroner’s inquests. The following issues were discussed: The 4 statutory questions that are answered at an inquest with the civil standard of proof (>50%): Who died? When did they die? Where did they die? How […]

The London Consultants’ Association comprises leading consultants in the capital who work in a variety of private hospitals. Formed in 1998, the association’s principle objective to maintain the independence of private medical practice and to defend the freedom of choice for patients and doctors.

LCA supports the need for professional integrity, mentorship and maintenance of standards, and believes in professional self regulation, as is being proposed by the Royal Colleges and government registered organisations, rather than regulation by insurers.
Join

Membership of the LCA is open to all recognised consultants working in London (loosely defined as within the M25). Associate membership is available for general practitioners and other consultants outside London.

If you want to learn something about private medical care in the UK then please browse the following pages.